Why a data scientist is not a data engineer

I found an interesting article on O'Reilly.com ,written by Jesse Anderson, which explains the differences between Data Science and Data Engineering. The two disciplines are not interchangeable—and misperceptions of their roles can hurt teams and compromise productivity. 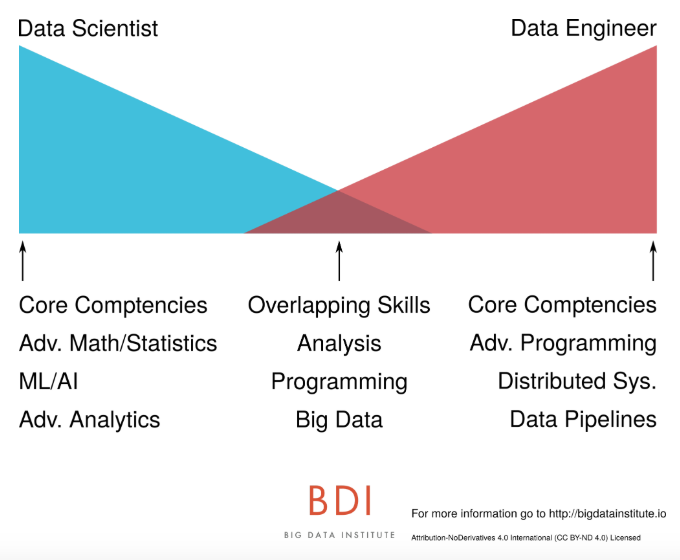 What are Data Scientists and Data Engineers?

At their core, data scientists have a math and statistics background (sometimes physics). Out of this math background, they’re creating advanced analytics. On the extreme end of this applied math, they’re creating machine learning models and artificial intelligence.

Just like their software engineering counterparts, data scientists will have to interact with the business side. This includes understanding the domain enough to make insights. Data scientists are often tasked with analyzing data to help the business, and this requires a level of business acumen. Finally, their results need to be given to the business in an understandable fashion. This requires the ability verbally and visually communicate complex results and observations in a way that the business can understand and act on them.

At their core, data engineers have a programming background. This background is generally in Java, Scala, or Python. They have an emphasis or specialization in distributed systems and big data. A data engineer has advanced programming and system creation skills.

There is an overlap between a data scientist and a data engineer. However, the overlap happens at the ragged edges of each one’s abilities.